What is The Origin Of The Chinese YoYo ?

Being the second oldest toy in the world, the yoyo is something that we’ve all played with at some point. Some of us have mastered all the tips and tricks to it while others of us have picked it up as a recreational hobby, but how many of you have played with the delightful Chinese yoyo?

What is the Chinese YoYo?

Different from the typical yoyo that comes to mind, the Chinese yoyo is an ancient Chinese tool that consists of two sticks, one that you hold in your right hand and the other in your left with a string connecting them together. Next comes the yoyo itself which has two equally sized wheel shaped discs that are connected by a horizontal piece of wood. When you put these two items together they form the Chinese yoyo which can be used to perform many graceful, fun and eye-catching tricks that can be enacted on your own or with friends.

The Origins of the Chinese YoYo

The Chinese yoyo can be traced back to around the Ming Dynasty between 1386 – 1644 AD under the reign of Emperor Yongle, with the oldest Chinese yoyo having been found in the Shanxi Province. The toy prospered as a pastime for Chinese nobility during the Ming Dynasty, but over time made its way into the lives of ‘common’ people under the Qing Dynasty. As love and interest for the toy spread people began to sell and play with the Chinese yoyo at temple fairs often. This caused popularity for the toy to continue to grow, leading to many becoming interested in learning how to perform various tricks with the toy. At Chinese festivals, joyful and impressed crowds would gather around performers of the Chinese yoyo, resulting in the pastime rapidly becoming a cherished springtime activity and form of entertainment across the country. It was especially popular in the northern regions of China. Merchants also picked up the activity as a way to attract the attention of potential customers.

Soothing For The Soul

While a visual and eye-catching treat to the eyes, the Chinese yoyo was also a refreshing auditory experience. During this time period, many yoyo’s had holes drilled into them and were made of bamboo, causing them to produce a melodic tune whenever air passed through the holes as the yoyo was spun. The pitch and sound it created varied depending on the size and the number of holes in the yoyo. In An, from ‘the Description of Capitol Happenings’ the Chinese yoyo was described as,

“Cut the bamboo like the shape of a hip drum. Pull it with two pieces of string. It slowly moves. When the wind blows, it spins like flowing water. In the mountain temple, hear the harmony of bells.”

This gained the toy various regional nicknames such as kōngzhōng which means hollow bell, or tzuh-ling which means pulling bell, empty bell or wind bell. The musical sound it creates is also said to have symbolized the awakening of spring.

The Development and Origin of the Diabolo 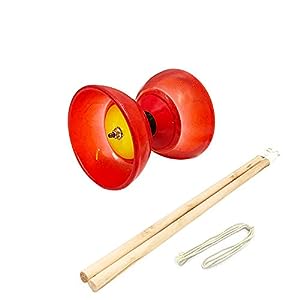 Towards the end of the 1700s, the Chinese yoyo was introduced to Europe by missionary Father Amiot who under Lord Macartney’s ambassadorship brought over the toy from Beijing to Europe along with other items of interest from China.

Later on in 1791, when the Prince of Wales was seen in papers playing with his yoyo, others quickly sought to acquire the toy too. The prince’s image with the yoyo was so popular that people in Britain began to call the yoyo the Prince of Wales toy. Off the coast in France, the toy was also gaining popularity amongst the nobility.

The Chinese yoyo later went on to be showcased at a presentation of Chinese culture that was edited by stenographer Jean-Baptiste Joseph Breton in 1811-2 (La Chine en miniature), resulting in further widespread interest in the toy across Europe and later on America in the 19th century amongst aristocracy. The toy continued to be wildly popular in Europe and the United States, making it one of the most popular toys of the 20th century amongst both adults and children. Nicknames of the toy in Britain included the bandalore, quiz, or the Prince of Wales toy whereas in France the nicknames incroyable or l’emigrette were trendy amongst the nobility.

The Rise In Popularity

The increasing popularity of the Chinese yoyo led to its westernization and the creation of the diabolo. The development of the diabolo has been credited to Gustave Philippart, who was a Belgian inventor that made the diabolo with two metal cups that were protected by rubber in 1906.

The diabolo doesn’t produce the same sound as the Chinese yoyo, but it is made of rubber with no holes to make it more durable and easier to perform tricks with. As the traditional Chinese yoyo’s were made of bamboo they broke easily, making them difficult to perform complex tricks with, but the diabolo’s usage of rubber made it more sturdy and convenient. The sticks used with the yoyo remained the same, but rather than the wheel shaped discs that accompanied the original Chinese yoyo, the European variant featured two bell shapes. The axle of the diabolo is also significantly shorter, making it resemble an hourglass shape. Philippart craftily patented the toy diabolo, meaning ‘the devil on two sticks,’ to allude to the persistence needed to master the tricks. 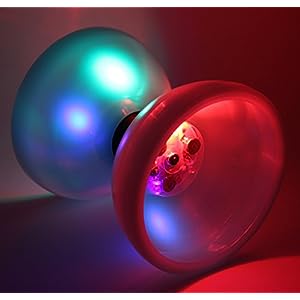 Over the course of hundreds of years the Chinese yoyo has evolved and remained popular while experiencing minimal changes in its appearance, but at every turn of history it has been a fun toy that has captured the imagination and awe of many with its dynamic and versatile tricks. From 1950 to now it has evolved to not only be used as a pastime, but also for performances in circuses for entertainment like juggling, acrobatic performances and Chinese dances. Chinese New Year is one such event in which you can witness the skillful displays from Chinese yoyo users showing plenty of spectacular and dynamic moves.

The Chinese yoyo and its descendant the diabolo can be performed in a vast array of ways and ranges from tricks as easy as throwing the yoyo up in the air to throwing it around the performer’s back. New tricks are constantly being created for Chinese yoyo and in 2006 it was one of the first items that China announced as a national intangible cultural heritage.

Passing The Test Of Time

One reason why Chinese yoyo has remained so popular is its rewarding, but non-competitive nature that allows users to learn and develop fun, but challenging new skills. Learning new tricks can be difficult at first but it can teach users to build up tenacity and learn what it’s like to fail many times before being able to master a trick. One interesting trick performers can learn is being able to spin multiple diabolos on the string at one time. The tactile activity is brilliant for developing gross motor skills while also improving the learners ability to concentrate – skills that will translate well physically and mentally into a multitude of different areas in life.

Learning tricks with the Chinese yoyo is also a fantastic way to become a part of a collaborative and amiable social environment where you can learn and share tricks with other users. Chinese yoyo can be played on your own and with others, such as passing the yoyo from one user to another so that a plethora of people can show off different techniques in a performance.

It’s also just plain fun and cool to show off to others! Whether you opt for the traditional Chinese yoyo or the durable diabolo as a hobby or a new performance skill to add to your arsenal, you can immerse yourself in a new and exciting skill with a rich and established history behind it.