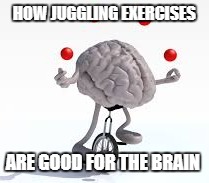 The benefits of juggling exercises and learning to juggle aren’t just for entertainers trying to work a crowd. It’s an aerobic exercise, it develops your core strength, and the real focus required to juggle multiple objects from hand to hand can be a stress-relieving distraction. (That is, as long as you aren’t juggling chainsaws, torches or fireballs.)

So it turns out juggling exercises are really is a workout for your brain, too. Juggling improves hand-eye coordination, reflexes, peripheral vision and a host of other motor skills [source: Rosenberger]. Recent research has even demonstrated that juggling can affect the size of your brain, so there you go!  Juggling exercises give you a bigger brain. Several studies have shown a correlation between juggling exercises and changes in the brain’s grey matter, the cell bodies responsible for computation and processing within the brain, and white matter, the nerve fibers that connect different parts of the brain by way of electrical impulses.

A 2004 experiment by researchers at University of Regensburg in Germany found that a group of 12 inexperienced jugglers who practiced the sport for three months experienced a 3 to 4 percent increase in grey matter in the mid-temporal area and the left posterior intraparietal sulcus — areas of the brain utilized in reaching or grasping for objects in your peripheral vision. (A control group experienced no change at all.) The increase was temporary, though: Another scan taken three months later showed that these increases declined by 1 to 2 percent once they stopped juggling [source: Science News].

In 2008, a study from the University of Hamburg showed similar results in the brains of older adults. Jugglers showed increases in grey matter within the hippocampus (a part of the brain involved in forming and processing memories), nucleus accumbens (the brain’s pleasure center) and visual centers. The gains were gone within three months, but the changes suggests that the aging brain retains neuroplasticity — its ability to change and grow in response to new experiences [source: Boyke, Driemeyer, Gaser, Buchel, May].

Juggling and juggling exercises also affects white matter, according to a 2009 study by the Oxford Centre for Functional Magnetic Resonance Imaging of the Brain. Researchers tasked 12 novice jugglers with 30 minutes of practice every day for six weeks. The jugglers showed a 5 percent increase in white matter in the intraparietal sulcus [source: BBC]. Brain scans taken four weeks after the subjects stopped practicing showed that increases in both white and grey matter remained. Study authors believe that the changes stem from the time spent training a new complex skill, rather than the level of expertise attained, and that effects would probably be seen if the subjects had learned a different complex skill. But chances are if your brain is locked in the rhythm of juggling, you aren’t thinking about doing much else.

So there you go! Juggling exercises and juggling in general really is good for you.